Who's Who, Rogues Gallery, Hall of Fame!

Although Ska sung with a 'scouse' accent wasn't in the original blue print of of it's Jamaican roots we believe it has it's place. If coventry can do it so can Liverpool!!!

Murph first plied his musical trade in Liverpool and London, but finally made the move to Devon, where his guitar began to gather dust! His neighbour, our Grimbo, who was already in the EMBEZZLERS, suggested that Murph should audition for the vacant lead singer position. Very reluctant, a 'stand off' occured for several weeks!

After finally turning up to an audition... Murph became the EMBEZZLERS lead singer! Right at the front is where Murph thrives... Skanking like you have never seen... trading banter with the punters and along with the exceptional backing of the rest of the band... regularly has the whole place bouncing up and down!!!

If you don't believe it... come see for yourself! 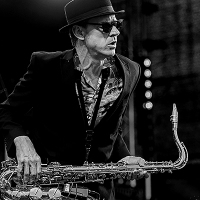 Although he's known as 'Grim' to the rest of the band... He's not really Grim at all... He's actually a very nice bloke! A legend in his own right with a saxophone in his hand, our Grim brings you all those instantly recognisable Two Tone sax lines that make The EMBEZZLERS tunes really come to life! If he hasn't got his reed in his mouth then he is usually belting out backing vocals like nobody's business! 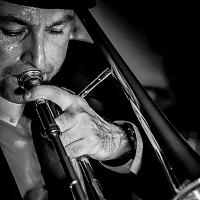 'Cool Hand Luke' is certainly a good description for this chap! Although Trombone and Keys are his main stay in The Embezzlers, there isn't an instrument that he can't play!!! Leave your instrument unattended at rehearsal for just a minute and Luke is right on it! If he had 12 pairs of hands he could be the EMBEZZLERS all by himself!!! Playing live is what Luke enjoys most, The Embezzlers being just one of the many bands he is in! Music Teacher by day, Music Genius by night!

Nige... A Stalwart in the local band scene in Exeter, like forever! A founding member of the Embezzlers and an absolutely faultless rhythm guitarist... Once he has a guitar riff or melody down, it's locked in his head forever and then transmitted through his fingers perfectly every time! If Carlsberg made rhythm guitarists...

He is the resident 'Schmoozer' and one of the nicest chaps you are ever likely to meet! But... don't get him started on Jazz drummers.... 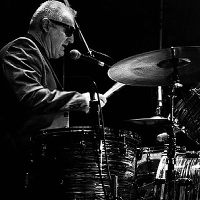 He ain't called 'Rock Steady Eddy' for nothing! Daz... along with JRP is the is the 'Engine Room' of the band! Keeping the beat and the groove going faultlessly for periods of up to 2 and a half hours at a time, and he barely even breaks a sweat! Although Daz humbley will just say he is the guy that hangs out with the real musicians!!!

Daz is also, like Nige, a co-founder member of the Embezzlers and responsible for many of the song choices... so if you don't like it... it's his fault! if you do like it, it's also his fault!!! Viva La Rebel Music!! 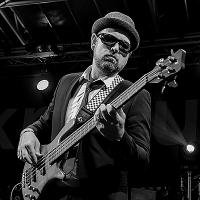 Jonny Boy... The other half of the 'Bezz' rock solid rhythm section, but also known as the bossy one! Coming from a Funk and Soul background, he wasnt sure if the Embezzlers were his cuppa, but willing to meet the challenge, Jonny was completley sold on the whole Ska and Two Tone Vibe within the first 5 minutes of his first gig! Forget Johnny Too Bad... It's Johnny Too Good! 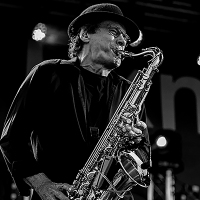 Dave or 'The Mighty Biscuit' as he is known due, to his ability to nail an entire packet of Custard Creams before a show, joined us sporadically to fill in for Grim when needed. Fast forward a few years and Dave is now a proper full time member of the 'Bezz'

Don't EVER leave him alone in a room with a Foxes Selection Box!